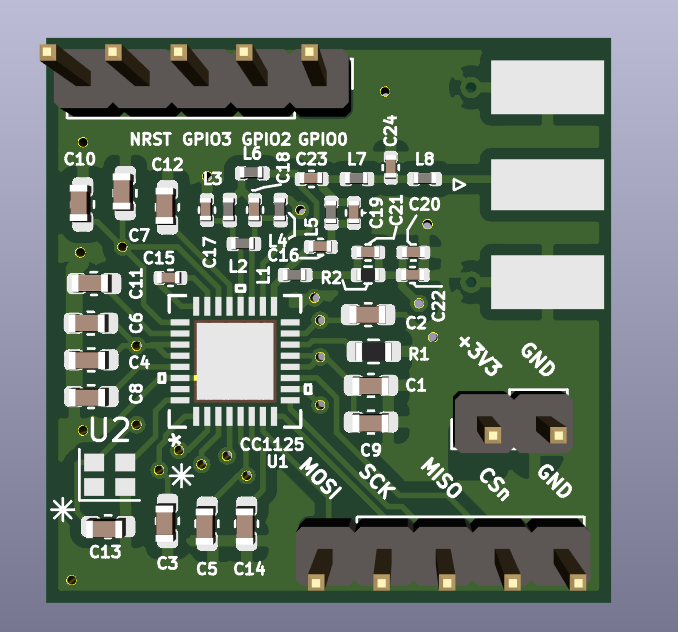 As you may have seen in the lab, the tiny board pictured above is the latest Parabilis low cost satellite radio prototype. Unlike the previous Parabilis revisions, this board is not a "complete" version of the radio, but instead designed primarily as a tool to assist with the firmware development. Ideally, this board will allow us to debug just the CC1125 SPI interface and RF input/output, so that we can build the system around it after climbing the tall pole of simply getting the CC1125 to transmit and receive.

Like any dev board, the CC1125 breakout board simply provides minimal supporting circuitry and "breaks out" the communications/control pins to a pin header. This supporting circuitry consists of two main parts: a combined balun/matching network between the RF output/input and the SMA header, and a TXCO to provide a clock to the CC1125. Then, the SPI bus, control pins, and GPIOs are broken out to the pin headers.

Ideally, this design will allow us more flexibility in debugging the CC1125. Due to the ongoing global chip shortage, we can't order additional CC1125's until February, so using the breakout board allows us to test different microcontrollers without making a new board. Although we have mostly finalized the IlliniSat-Zero microcontroller now, this wasn't always the case -- previously we used STM32 L0s and STM32 H745s specifically. The STM32 H745, for example, was one of the contenders for the IliniSat-Zero CDH board, but we realized that there were several complications with the dual-core architecture and certain peripherals that made it unsuitable for use in IliniSat-Zero. If we uncover similarly unforseen issues with the current microcontroller for IlliniSat-Zero (STM32 L552), using the breakout board will allow us to easily port the firmware to a different STM32 and evaluate it without making a new board. Additionally, the other advantage of the breakout board is that it will easily allow us to evaluate combinations of amplifiers and filters on the RF end. This will allow us to quickly experimentally optimize the RF output rather than making a new board for a new amplifier or filter.